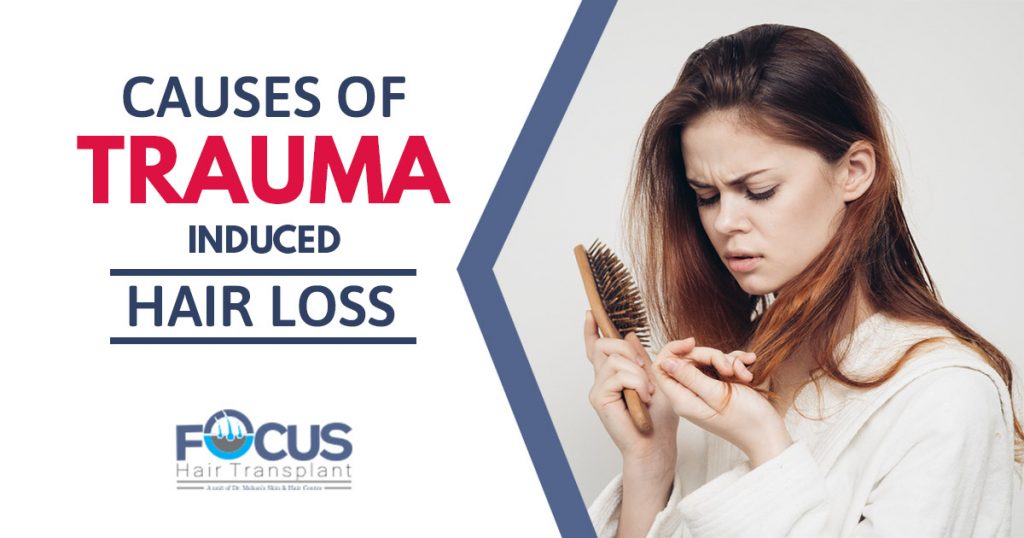 If you are dealing with hair loss, it could have more than one reason. Sometimes it may be just due to nutritional deficiency, sometimes due to an autoimmune condition and sometimes it might be due to trauma. Yes, trauma can trigger hair loss. In any case, you will require a hair transplant if your hair loss shows no signs of abating or responding to other methods. In this post, we intend to throw light on trauma-Induced hair Loss.

Bleeding is natural after the skin suffers some kind of trauma. The resultant bleeding could happen at two levels: The first layer is the external skin. The second layer is the inside or under the skin. We all know that the scalp skin consists of several layers: epidermis, dermis, and fat.

Epidermis: It is a very thin layer that can be easily disrupted. The main role of this layer is to conserve moisture and avoid dryness.

Dermis: It is the most active layer of the skin. It contains the main organelles of the skin like sweat glands and hair follicles.

Fat layer: This layer cushions the body and acts as a shock absorber. It is fluffy with low density. It is here where the ruptured blood vessels bleed.

Blood has a natural tendency to coagulate and the lump formation can happen at very complex levels. The expansion may cause the death of some hair follicles.

Edema refers to the swelling that begins to develop immediately after the trauma. The body uses this normal defense mechanism for slowing down the blood loss and providing a cushion if further trauma is caused. The “puffing” mechanism allows the scalp to spread the trauma over a much larger area and decrease the severity of the damage. However, the hair follicles have to pay the price for saving the skin and the internal organs. Edema can cause the loss of hair follicles by destroying the blood vessels on which they rely for nutrition. Sometimes the hair follicles may emerge undamaged if the blood vessels manage to survive the blow. If they don’t, then the area will be devoid of hair in the future.

This is another defense mechanism of the body that oversees the repair work after the edema has drained out. To make the injured areas tougher, a limitation is put on the number of blood vessels that can grow in that particular area. So the hair follicles in the area near the site of fibrosis are likely to get injured or die, resulting in loss of hair, bald patchy loss, or hair thinning.